Oh my.  Where to start?  Where did the last two and a half months go?  Nate has 3 short days of summer break left and then it’s on to first grade!  Let’s see.  We survived tball season.  I’m still not convinced we are cut out to be a sports consumed family.  The kids loved attending VBS this summer.  They still sing the songs and continue to remind each other to “trust God” on a regular basis.  We traveled down to my parents and spent a week.  My Grammy was still with them, and I was super excited for Nate and Jilly to get to see her again since they weren’t part of my February trip.  We’ve enjoyed our splash pad, but with the extreme weather, we’ve not been there too much.  Jilly is beyond excited to start preschool on her birthday.  I’m still in disbelief that she’s about to be four!  We’ve been hard at work on our basement.  Framing of the walls is done.  Plumbing is run.  Electrical should be in sometime in late September, and then it’s on to drywall!  I’m sure there’s much more, but I’ve been putting off blogging longer and longer because of being so super behind.  Now I feel at least a little caught up.

One Day at a Time 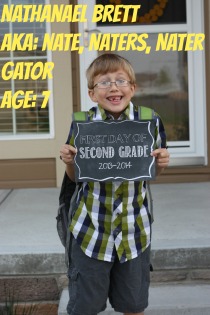